The European cosmetics market returned to a more dynamic growth in 2015, despite trying economic circumstances, revealed Cosmetics Europe. Decorative cosmetics (make-up) was the most dynamic category, before skin care and fragrances. The European trade association also highlighted the significant contribution of the cosmetics industry to the European economy.

According to the figures recently released by Cosmetics Europe, the European cosmetics and toiletries market grew by +3.1% in 2015, compared to 2.1% in 2014. 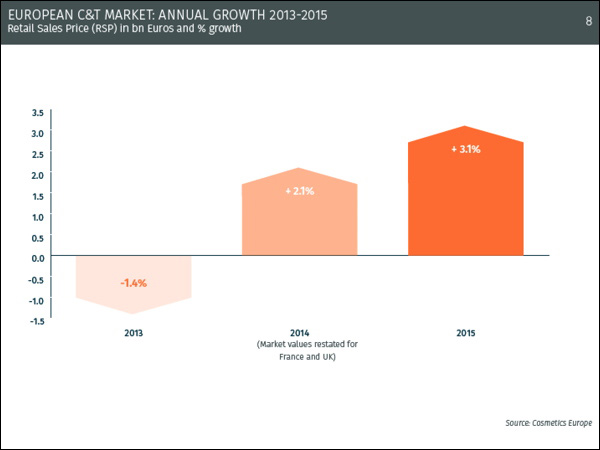 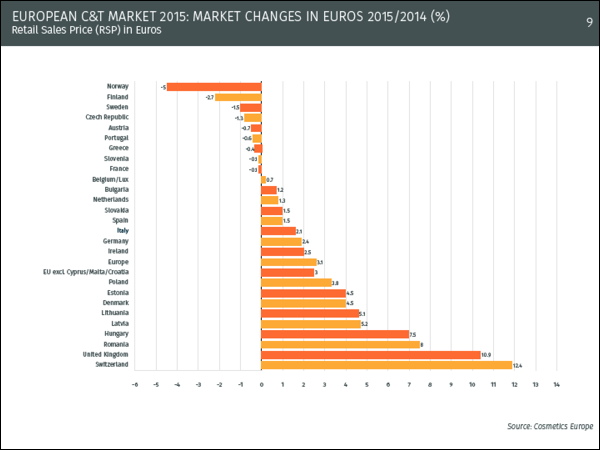 Skin care and toiletries remain the most important product categories in Europe, followed by hair care and fragrances. 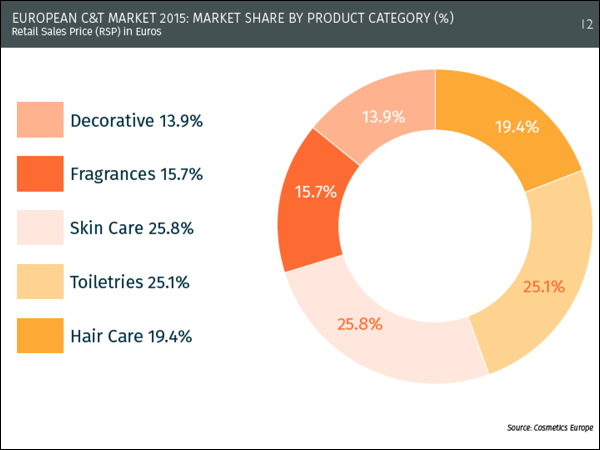 On the occasion of the third Cosmetics Europe Week, which was held from 13 to 17 June 2016, the European association of cosmetic manufacturers, also presented the results of a study on the socio-economic contribution of the cosmetics industry.

According to the report prepared by Risk & Policy Analysts Ltd. (RPA):

The vast majority of Europe’s 500 million consumers use cosmetics and personal care products contributing to well-being and healthy lifestyles, and positive self-esteem every day. The European export market (mainly from France, Germany and Italy) totalled 17.2 billion Euros in 2015, with France and Germany accounting for around 53% of total exports from Europe.

The strength of the entrepreneurial cosmetics industry lies in its mix of both big and small companies: there are 4,605 SMEs in Europe and this number is growing
At least 2 million jobs are supported across the European value chain, with 56% women and 44% men being employed in the cosmetics industry.
The sector is science driven with more than 26,000 scientists in the industry, covering a diverse range of scientific disciplines. 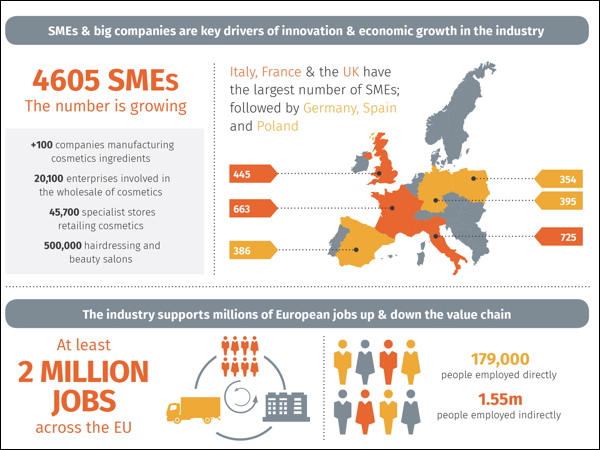 “Europe is the global flagship producer of cosmetic products. In 2015, the European cosmetics market was valued at 77 billion euros, making Europe the largest market for cosmetic products in the world. The industry make a significant contribution to the European economy across its value chain.

It is estimated that the cosmetics industry brings at least 29 billion euros in added value to the European economy every year, of which 8 billion euros is contributed directly by the manufacture of cosmetic products (the remaining 21 billion euros is generated indirectly through the supply chain),” said Cosmetics Europe.